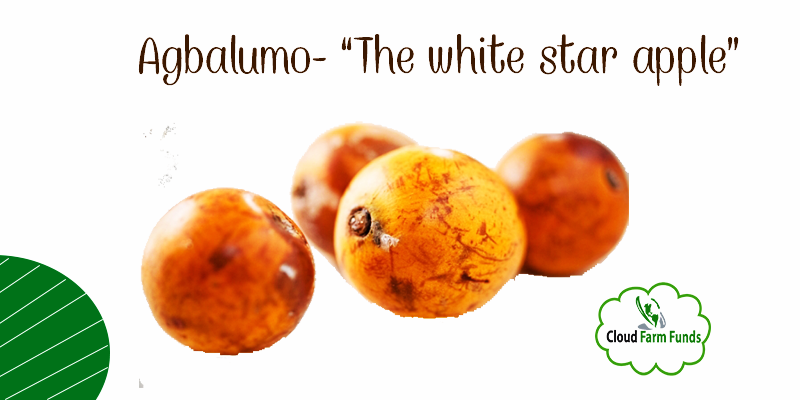 Popularly known as Agbalumo is a tasty local cherry with its succulent fleshy pulp and sweet seeds is a fruit most liked by many. You do not want to eat this fruit when it is not in season. Before it ripens, the juice is still yet tangy and will produce an unpleasant ‘slapping’ sensation if eaten.  It is best to wait for the fruit to drop from its tree, and if lucky enough you could be the first one to snatch it off the ground. Some of us say you could dance around the tree and sing for one to drop for you, perhaps?

Agbalumo also known as “white star apple” or African cherry is dark yellowish fruit with semi-circle seeds, a popular seasonal fruit normally consumed with its flesh because of its sweetness. It is botanically called “chrysophyllum albidum,” mostly cultivated in the rural areas and is very common during the months of December to April. Its a forest fruit tree described by the Scottish botanist George Don. It is commonly found throughout tropical Africa.

Amongst the eastern and southern parts of Nigeria, it is called “Udara”  & called Agbalumo in Yoruba of Nigeria

The fruit is mostly found in African countries like Nigeria, Cameroon, Cote d’ Ivorie, Uganda and the Niger Republic.

This wonderful fruit is picked by Africans on their way to the farm, during the era of our forefathers. But nowadays you get it from the marketplace as it has become a source of income to the people mostly living in the rural areas. During “white star apple” season you will see both adult and children savouring the great taste of this indigenous fruit.

Unfortunately, unlike most fruits, you cannot really tell from its physical state if the fruits is ripe or not. One thing you could do though is to take a litmus paper to the market and squeeze a little juice on it, to determine its acidity.

For people with kidney problems, eating star fruit regularly may lead to kidney damage as well as star fruit toxicity, which may cause neurological problems — such as confusion, seizures, and even death.

Did we leave anything out? Let us know what else you know about the white star using the comment box below.