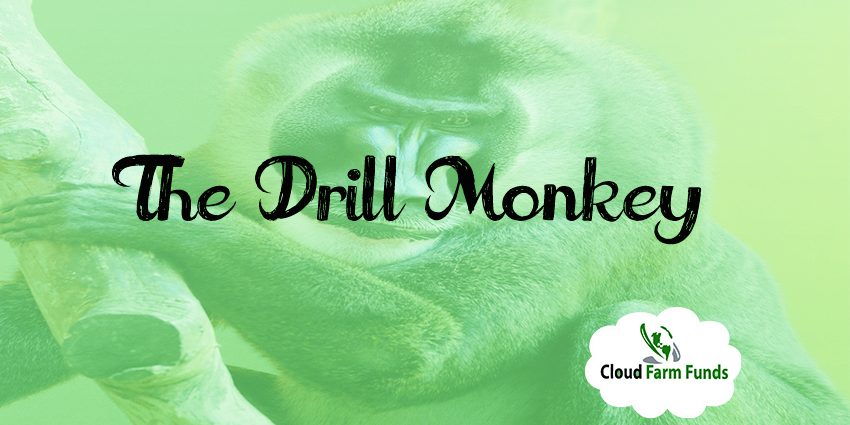 The drill monkey is also referred to as the old world monkey which is related to the baboon and more closely to the mandrills. The old world monkey is a English name given to the family of primates (A group that contains all species commonly related to Lemurs, Monkeys & Apes) Though the drill monkey is mostly terrestrial which means it relates to the earth or on the dry land, traveling over land on all fours and climbing the trees to sleep at night.

Though they are technically protected by the law in Nigeria & Cameroon but these Laws aren’t strongly enforced which is why these drill not only continue to be hunted but as well becoming smaller in size, Also it is said to be one of the most endangered species in Africa (Species which is considered threatened if it is likely to be endangered within the foreseen future).

Drills live in groups of up to twenty members, led by a dominant male, but occasionally these groups will come together to form super groups of over a hundred individuals. Males have red chins and red, pink and blue bottoms, and when they are excited, these colors grow brighter. The females give birth to a single baby; twins have been recorded once at the Drill Rehab & Breeding Center in Nigeria. Depending on the season and how much food is available, drills are seminomadic (a member of a people or tribe that has no permanent abode but moves about from place to place) and will rub their chests against trees to mark their area. As with other monkeys, drills communicate by using facial expressions like the “grin”, but unlike other monkeys (where grinning is a sign of aggression), when a drill grins, it is actually a friendly smile.

Drills are omnivores – they’ll eat anything. While they mostly eat fruits and various plant parts, they can also eat insects, sea turtle eggs, snails and small monkeys of other species.

The talapoin is the smallest old world monkey with a head & body 34-37 cm in length and weighing out 0.7 & 1.3kg while the drills as one of the world’s largest monkeys, display extreme sexual dimorphism, with males growing to double the size of females. On average, a male drill can grow to about 70 lbs (32 kg) with his more petite female counterpart weighing at about 26 lbs (12 kg). Average length at maturity is 22 in (56 cm).

A drill in captivity can live on average about 28 years. Females tend to have longer lifespans than males; the oldest known drill lived to be 46 years old.

Old World monkeys have a variety of facial features; some have snouts, some are flat nosed, and many exhibit coloration. Most have tails, but they are not prehensile.

Drill monkeys are known for being shy, but they have great smiles. They use this smile, known as an “appeasement grin,” to keep the peace when they greet others.

Fun Fact About The Drill Monkey

Did we leave anything out? Let us know what else you know about the drill monkey using the comment box below.