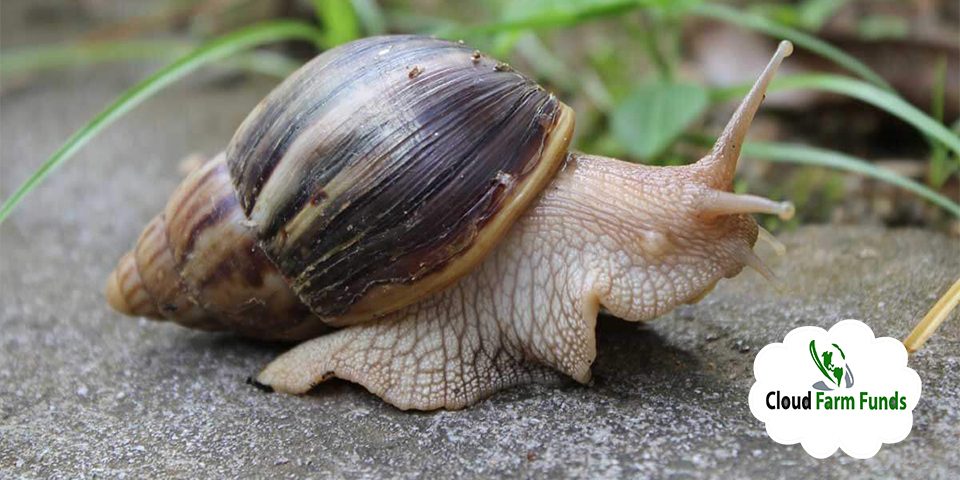 No doubt, Some of us who go into restaurants and tell the waitress ‘I want pounded yam with vegetable soup that has plenty assorted snail’. Yep I see you. Well today we are looking into snails. The animals remarkable for their impeccable speed WINK. Snail is a common name for gastropod molluscs that can be split into three groups, land snails, sea snails and freshwater snails. The largest of them all being the syrinx aruanus (sea snail) whose shell can reach 35 inches and weigh up to 18 kg, we also have the famous giant African land snail which can grow to about 15 inches and weigh 1 kg.  They are nocturnal animals; most of their activities take place at night. Snails don’t like the sunlight, which is why you find them out more on rainy/cloudy days. Some snails depending on species come with either lungs or gills.  Most snails are hermaphrodites, so they have both male and female reproductive organs.

The speed of snails is around 0.5-0.8 inches per second. If they moved without stopping, it would take more than a week to complete 1 kilometer. Common garden snails have a top speed of 45 m per hour ( that is pretty slow). Without their shells these animals are fragile, so the shell serves as a kind of protective sheet especially when faced with a predator. Snails host several types of parasites that, while it may not kill them, they are capable of affecting or killing their predators or animals that eat the snails. Even humans who eat poorly cooked snails can become seriously ill. The food of snails goes through a mouth structure called the radula (a ribbon like tongue which houses thousands of microscopic teeth). But not to worry, majority of snails are herbivores but some large species and marine based species can be omnivores or even carnivores. Land snails do not chew their food, they scrap it.  A single snail can have up to 430 hatchlings after a year. The size of the shell of a snail reflects its age. More so while we are busy killing to kill these snails for food, we should also remember that many snails are facing the problem of extinction. Even though a lot of people don’t care we should still take it upon ourselves to see to the continuity of these animals.

Life expectancy of snails depends on their habitat and the species. Some of them only live for about five years. However, others in captivity can live up to 25 years old. Throughout their lifetime some snails will hibernate during colder seasons. They will cover themselves with a thin layer of mucus which stops them from drying up. They also do sometime similar during really hot times called estivation. Snails leave behind a trail of mucus {it serves as a lubricant to reduce friction more so it allows them move upside down or climb a wall}.

Like other animals snails too court and mate with the courtship process lasting between 2 and 12 hours. Snails are strong yet fragile. They can lift things up to 10 times their body yet putting salt on it can lead to its untimely death. Due to the fact that when you pour salt on a snail (or slug) the water is very rapidly pulled out of the cells of the snail’s body by a process called osmosis. The bubbling comes from the slime and air being forced out of the snail’s body as it shrivels up. If enough salt is poured on the snail it will die of dehydration fairly quickly. It’s like literally draining it of all water in its body.

Interestingly a lot of snail delicacies are available almost everywhere in the world generally as fried meat and that would give rise to the question of how to clean their slime. Salt, lime and alum are three things I recommend because Salt has abrasive properties, lime has acidic properties and alum has purification properties. Snails are more of the reserved and somewhat shy animals. One touch has them recoiling back into their shells where they can stay till they feel confident enough to come out once more.

Snails apart from being used as food also offer aesthetics properties as their shells come in different designs, all marvelous and beautiful in its own way. The spiral patterns leave more to imagine, one of Gods many intelligent designs in nature. Topping the mucus of the garden snail is used to treat wrinkles, spots and scars on skin

Being an animal lower on the food chain comes with it’s consequences as they constantly live in fear of being eaten by predators especially when not domesticated. Their predators rank from beetles to even birds. Also note that there are certain snails that do not have shells; that is now what we call a slug.

Did we leave anything out? Let us know what else you benefit from Soybeans using the comment box below.