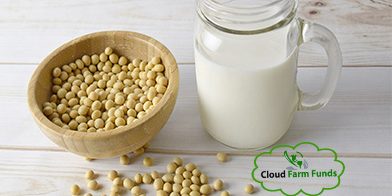 We all must have heard the term soy sauce somewhere before Soybeans. Well today we are diving into the world of soybean.  Soybean which goes by the scientific name Glycine max is a leguminous vegetable that grows in tropical and temperate climate. Soybean has been cultivated in China for thousands of years, and they also became popular in other Asian countries (especially Japan and Korea) over a thousand years ago (as early as the third and fourth centuries AD). Thanks to their origins in Asia. It was believed to have been introduced to Africa in the 19th century by Chinese traders.

The flowers of soybean are usually white or purple. The seeds can be black, brown, yellow, and can sometimes have more than one color. In the United States the majority of soybean crops are genetically modified for resistance to the herbicide glyphosate. Soybeans are usually harvested mechanically, after the leaves have fallen off the plant and the moisture content of the seed has dropped to 13 percent, permitting safe storage. As a legume it adds nitrogen to the soil by means of nitrogen-fixing bacteria and historically has been an important soil-enriching crop. Soybean is one of the richest sources of protein plus because of their lack of starch and decent source of carb and fat, they are perfect for diabetics. Furthermore the protein is the reason soybean is called ‘meat without bones’.

Nigeria is the largest producer of soybean in sub-Saharan Africa, followed by South Africa. In Nigeria the haulms and post-processed pulp (soybean meal) serve as important sources of animal feed. A 30% annual growth in the poultry industry from 2003 to 2008 fueled such a demand for soybean meal that an increase in imports was required. Many countries in the world depend on soybeans and other legumes as key sources of dietary protein. The United State is the world’s largest cultivator of soybeans, producing approximately 83 million metric tons of soybeans on 75 million acres of land. These soybeans are not only being cultivated for human food use but for other purposes. The soybeans are being genetically modified to produce products of greater value. Nearly 90% of soy products in the US marketplace are from genetically engineered soybean.

One acre of soybeans can produce 82,368 crayons. During the Civil War, soybeans were used in place of coffee because real coffee was scarce. 98% of the soybean and livestock farms in the country are still family farms. Soy ink is used to print newspapers and textbooks. Soybeans also find their way into candles, cleaning products and hair-care products. The soybean is the highest natural source of dietary fiber. Soybean is one of the few plants that provide a complete protein as it contains all eight amino acids essential for our health. Soybeans actually have hundreds of uses from industrial products like engine oil or cosmetics to foodproducts and animal feeds. Common soybean food products include soy sauce, soy milk, tofu, soy meal, soy flour and soybean oil. Soybean oil is the second most important vegetable oil (after palm oil). As tofu freezes, it takes on a yellowish hue. But as you thaw it, the tofu returns to its original color. Soy sauce is a lot like wine. The longer it ages, the more interesting and complex its flavor.  Young soybeans, known as edamame, are commonly steamed or boiled and eaten directly from the pod.  Soybean oil is the primary source of biodiesel in the United States, accounting for 80% of domestic biodiesel production; it is an environmentally friendly fuel.  Soybeans are one of the “biotech food” crops that have been genetically modified, and genetically modified soybeans are being used in an increasing number of products. Other fermented soy foods include tempeh, miso, and fermented bean paste. They are a rich source of various vitamins, minerals, and beneficial plant compounds, such as isoflavones.

Osteoporosis is characterized by reduced bone density and an increased risk of fractures, especially in older women. A lower rate of Osteoporosis has been linked to a higher intake of soy foods especially fermented whole soy food. These effects seem to be caused by the isoflavones contained within the soybean. In the overall picture, we continue to believe that soy foods can provide you with important health benefits, including bone-related benefits. It’s important to remember that soybeans provide a good amount of vitamin K, a much-needed nutrient with respect to bone health. Equally important, soy protein is a plant protein. In broad studies of diet and bone health, plant proteins have a better track record in support of bone than animal proteins. Even though many controversies remain in the area of soybeans and bone health, we believe that your 4-8 cups of legumes each week should contain some whole food form of soybeans and especially versions that have also been fermented.

Menopause is the period in a woman’s where she seizes to menstruate and they most likely always come with unpleasant symptoms generally called ‘Hot Flashes’. After a research was conducted it was seen that Asian women are less likely to experience these uncomfortable symptoms. This was traced to their higher consumption of whole soy foods. But this is limited to equol producers. These are people who possess a type of bacteria able to convert isoflavones into equol. Hormonal therapies have traditionally been used as a treatment for menopausal symptoms, isoflavone supplements are widely used today. Although most studies haven’t been able to establish the link but let’s wait and see what the future holds.

A second area of potential health benefit is prevention of type 2 diabetes. In multiple animal studies, soy foods have been shown to lessen insulin resistance by increasing the synthesis of insulin receptors. However, this increased formation of insulin receptors only appears to occur in the presence of other dietary circumstances, like a moderate amount of polyunsaturated fat intake. High levels of total soy intake (approximately 200 grams per day) have also been associated with decreased risk of type 2 diabetes, but only in Asian populations thus far. We look forward to more research on human consumption of soy and prevention of chronic health problems related to insulin metabolism and blood sugar levels.

The ability to improve the metabolism, help people gain weight in a healthy way, protect heart health, improve digestive health, protect against birth defects, increase circulation, decrease the risk of diabetes, and generally tones up the body, cancer prevention. Considering the pack of nutrients contained in soybean I say all these justify that. Soybean also improves soil fertility by adding nitrogen from the atmosphere. This is a major benefit in African farming systems, where soils have become exhausted by the need to produce more food for increasing populations, and where fertilizers are hardly available and are expensive for farmers.

Did we leave anything out? Let us know what else you benefit from Soybeans using the comment box below.